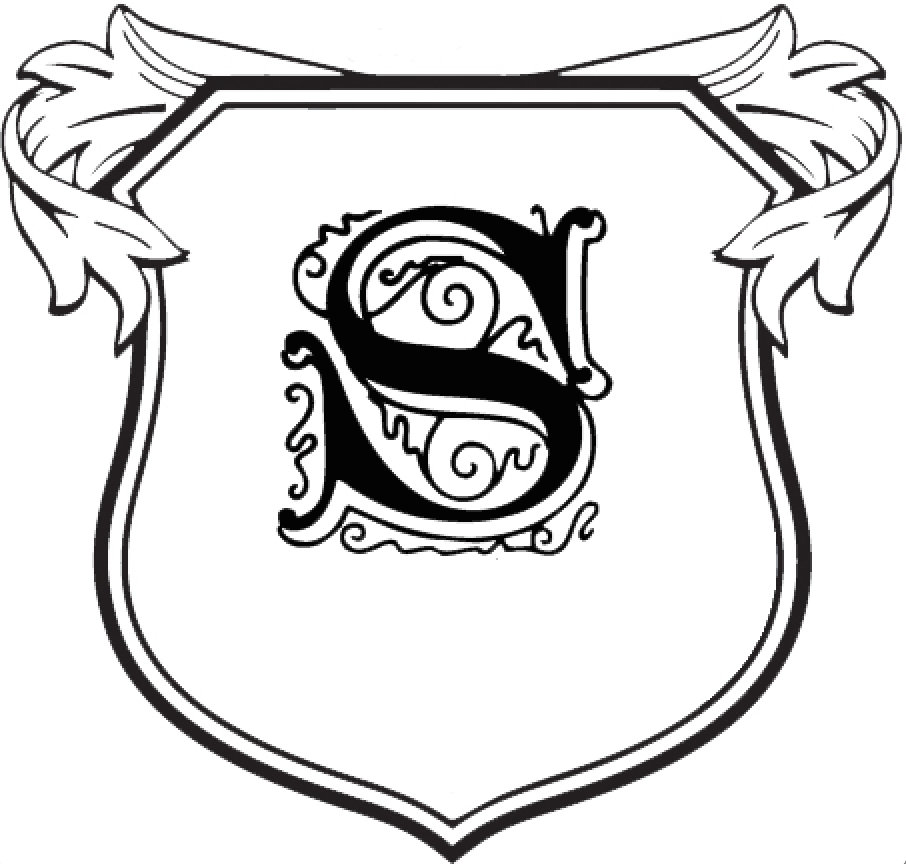 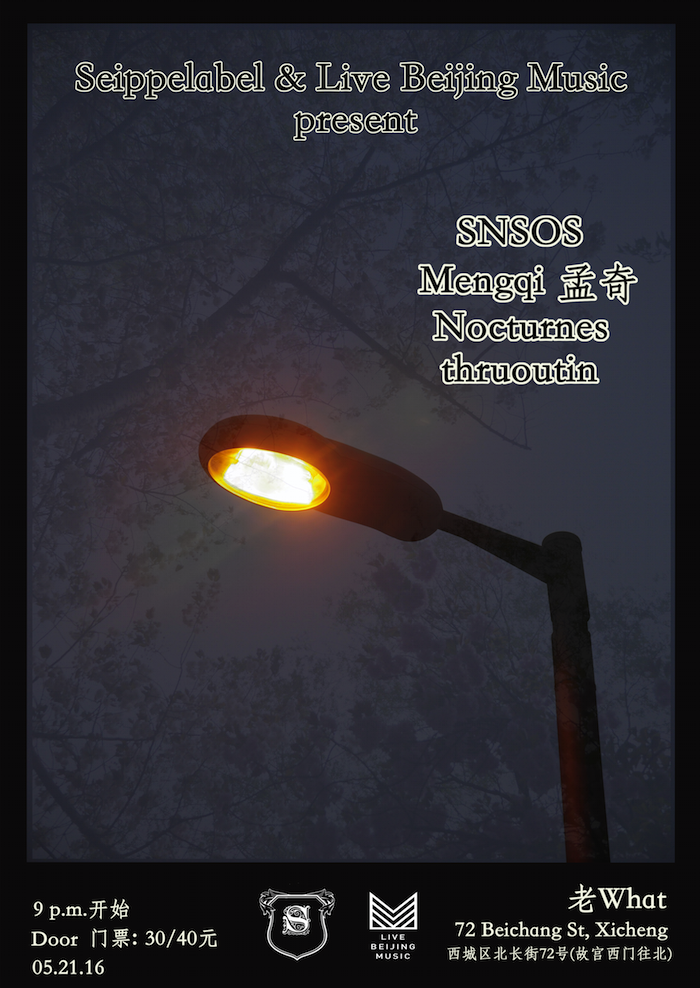 Seippelabel and Live Beijing Music team up for the very first time to showcase a couple of acts featured and Seippelabel and covered by Live Beijing Music. We are pround to host this event at What Bar; One of Beijing’s most revered and long running small venues. The night will be sure to delivery quality performances floating around the post-rock, live modular synthesis, indie-electronica and experimental electronica respectively. 这个活动是第一次Seippelabel厂牌和北京现场音乐博客合作。那天晚上会在北京很重要的一个小现场，老What。观众有机会听到好质量的后滚，合成器音乐，独立电子，和十堰电子都在一个晚上。

Emerging cross-national label Seippelabel joins forces with Live Beijing Music for a celebratory evening of offbeat sounds, electronic wizardry, and transcendent soundscapes at one of Beijing’s longest living strongholds in the music scene – the Old What? Bar. Seippelabel, the label founded by local musician Brad Seippel, shines a light on the diverse sounds found in Beijing and beyond, as evident in the their latest just released installment whose sounds reach as far as the UK – check out their full catalog here. On Saturday, May 21st, they’ll join LiveBeijingMusic for some summer festivities at the Forbidden City hole in the wall as well as one of the scene’s most underrated gems, the Old What?, will host four diverse potent acts. First up, the electronic MVP of Beijing, a wizard synth maker, programmer, and soundsmith, Mengqi, brings his bag of audio tricks. Next up, emerging indietronica duo Nocturnes, made up of vocalist Leslie and electronic producer David Carey, bring their lush, sensual tunes for a spin while post rock crusaders She Never Sings Our Songs (SNSOS), whose presence has duly been noted since their emergence last year, present their elegant, enveloping soundscapes. And finally, Seippelabel head honcho thruoutin, one of the scene’s busiest electronic producers out there, performs his blend of Chinese-infused instrumentation and intricate electronica. Intoxicating sounds on a fine summer evening, with chuan’r and roadside beers – it’s a show you don’t want to miss!

Could you tell me briefly about where you both are from, how you met/decided on doing music together?

I wish I could. I awoke from a month-long mushroom trip to find myself in China as part of a 2-piece Indie-Electronic outfit with a finished EP. I was less enthused to find myself married to a Madagascan man called Nigel that was just using me for my Irish passport. But you have to take the good with the bad. Leslie (the singer/lyricist), tells me that what in fact happened was that I posted an advertisement on Douban, looking for a singer to work with and she, a Qinghai-native who has been living in Beijing for over 7 years, coincidentally was also looking for someone to form an original band at the exact same moment. But what would she know, she was probably high on mushrooms.

On bandcamp there are pictures of a physical edition of the album "A World Full of Adults”. While digital releases are so convenient to do, where do you guys stand on still releasing physical material?

Feeling, like we do, that "A World Full of Adults" is a great break-up album, we thought it important to have a physical item you could fling at your former flame during the process of said break-up. We also are boringly old fashioned, and feel like something is much more complete when you can hold it in your hands. In that way, it is as much for ourselves as for people that enjoy our music. And if we're feeling angsty during our gigs, we can fling them at people. Performance Art.

You mention your songs are all recorded at home. Could you explain your process for recording?

We sort of approach the songwriting process in the same way as the creators of many modern art paintings do for their works. That is, we throw buckets of paint at white canvas for a while, but then realise that this isn't actually how you create music at all. Then we sit down, play a few games of Mahjong and wax lyrical about what plagues society. The answer? Not enough marmosets. Which is where the main themes behind the album lie. Somewhere along the way I write a guitar or piano part, record that in my home studio using Logic Pro, layer it with a multitude of different instruments and then send it to Leslie, who comes up with lyrics. In that way, our processes are very individual but symbiotic. A main part from our sound comes from cutting up vocals and turning disparate parts of them into sampler instruments, giving us a very synth-led sound that actually doesn't use any synths at all. Because fuck the Moog-archy.

Have you done many shows in Beijing? Where? How do they compare to where you’re originally from?

We started playing in March and have racked up quite a lot of shows already. A personal favourite of mine was our show at the now-deceased Mao, wherein my guitar decided kindly to fall apart midway through the set. Nothing speaks Rock and Roll more than holding in your guitar jack with one hand while tapping out a guitar solo with your other. We've also played in School Bar, Aotu Studio, Old What, Bluestream and we have gigs coming up in Temple, FruityShop, AZ club, and School Bar again. The main difference, I find, between here and Ireland, is that people actually show up to your gigs here. The smell of urine is also much less intense during gigs, at least until afterwards when you pass a public bathroom or happen to be walking down Wudaoying on a night when massive piles of manure have been deposited haphazardly along the road. True story bro. People here, both in the bands and the audience, are much more passionate about music, for whatever reason that may be.

What can we expect from your performance on the 21st at What Bar?

For starters, the bar will almost certainly change its name to "What!" afterwards, an exclamation mark being much more befitting of the awe with which they regarded our performance. Leslie will definitely crowdsurf, and if there aren't enough people for that she'll break dance on the floor. Our music is clearly suited to both of those activities. I will break from my guitar solo midway in A World Full of Adults, reach behind my amp, take out some raw noodle material, and perform one of those noodle dances that go down so well in places such as these. You can also expect us to play our debut EP, as well as 2 or 3 new songs, depending on how generous we feel on the night. We may even play these songs with feeling, providing we don't become jaded with the rockstar lifestyle we lead in the next few weeks. What we probably WONT do, is wear sunglasses indoors, strip onstage, or perform a shoddy thruoutin cover before you take to the stage.*

*all subject to change at the band's discretion.